Bellur Krishnamachar Sundararaja Iyengar was born on December 14, 1918, when his mother Sheshamma suffered from the effects of an influenza epidemic. His father Sri Krishnamachar was a teacher of school and Sundararaja was her thirteenth child. Sundararaja did not enjoy good health during his childhood: victim of malaria, typhus and tuberculosis at a time when antibiotics did not exist.

At the age of sixteen, Sundararaja began practicing yoga with her elder sister’s husband, Sri T. Krishnamacharya, a man of great physical strength, with much talent, culture and an authority in the scriptures. He taught yoga in the Maharaja Palace of Mysore. He was a very demanding.

In 1936, when Sundararaja was eighteen years old, he was appointed by his guru to go to Pune to teach yoga for six months. The choice fell on him because he had some knowledge of English as compared to his peers, who only spoke the local language (Kannada) or Sanskrit. Sundararaja had no choice. They ordered him to go and he had to. “With fear and doubt, I surrendered to his order as a privilege (ashirvad) and I went to Pune, which has become my field of action (karmabhumi) since then”, he later acknowledged.

In Pune he endured difficult times: without a house, friends or family, in a state (Maharastra) whose language and culture were foreign to him. Although he had lived in his guru‘s house for two years, before going to Pune, his relationship with Krishnamacharya had been very limited and he did not have many opportunities to learn from him. So, in Pune, he decided to practice with interest and attention to acquire knowledge from his own experience. He continued alone, adjusting and defining the āsanas and thus achieving perfection and precision.

He might be short on food, but he never neglected practice. He practiced for long hours until he came to understand the techniques of each āsana and its effects.

This perfection and precision of his practice was reflected in his teaching, and the number of students increased. However, at that time, teaching yoga classes did not get enough income to survive in a city. Sundararaja lived on the edge of poverty, without often knowing where his next meal would come from.

In 1943, his siblings arranged his marriage to a sixteen-year-old girl named Ramamani, who was unaware of yoga when he entered the life of Sundararaja. However, she soon absorbed the essence of yoga and became a real force behind the progress of her husband. Never she interfered in his practices, nor in his classes. On the contrary, she became a great support and one of his best critics and advisers. She took care of a large family: five daughters and a son, almost always without help, giving her husband the time he needed to continue the path he had chosen. Further he took on the task of initiating his children in yoga.

B.K.S. Iyengar began to be recognized as a yoga teacher. He taught some personalities like J. Krishnamurti, to freedom fighters like Jayaprakash Narayan, to Achyut Patwardhan, Commander of the National Defense Academy and numerous doctors and industrialists. He offered countless demonstrations much appreciated by personalities such as Dr. Rajendra Prasad, first President of India Dr. Mohammad Hatta, former Vice President of Indonesia, Marshal Bulganin, ex-USSR Prime Minister Nikita Krushchev, First Secretary of the Communist Party of the USSR, and he was granted an audience with Pope Paul VI. 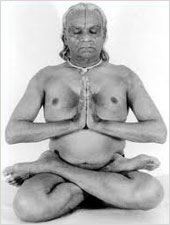 A chance encounter with violin master Yehudi Menuhin, in 1952, was decisive in introducing Guruji in the West, where he became known as Mr. Iyengar.

Menuhin was an enthusiastic student and year after year Guruji had to travel abroad to teach him and his family. Many more people joined these sessions and little by little a large number of Westerners became his students, who fervently waited for him to return the next year. Menuhin, like his other students, continued the practice and recognized Mr. Iyengar as: “his best violin teacher”.

He founded the Ramamani Iyengar Memorial Yoga Institute in Pune in 1975, where he has continued to teach and researching yoga for fourty years.

Yogacharya Sri B.K.S. Iyengar has been recognized as the highest authority of his time, worldwide, in yoga. He was appointed Doctor Honoris Causa in Sciences by the University of Mysore in 1997. Likewise, he received some of the most prestigious awards granted by the Government of the India: Padma Shri (1991), Padma Bhushan (2002) and Padma Vibhushan (2014). He was also included by Time magazine in its list “The hundred most influential people in the world” (2004). He passed away in Pune on August 20, 2014, at the age of 95.

Would you like to get the latest news in your mailbox?